Cinci Freedom: Cow Escapes Slaughterhouse and Prompts Public Outcry to Save Her

Cinci Freedom: Cow Escapes Slaughterhouse and Prompts Public Outcry to Save Her

After a nine-hour journey from Ohio to New York, “Freedom” the cow, who captured national media attention when she escaped from a Cincinnati slaughterhouse, finally arrived at her new home.

Freedom arrived at Farm Sanctuary’s New York Shelter around 5pm on April 11, 2002 and received a warm reception from Farm Sanctuary staff as well as the shelter’s other rescued cows. As soon as the back of the truck was opened, Freedom bounded into the barn that has become her permanent home. When they saw her arrive, the other Farm Sanctuary cows ran to the barn to greet Freedom. The cows mooed hellos to their famous new herd-mate, and gave her cow kisses. Freedom was quickly adopted by the shelter cow herd, and is now roaming green pastures with her new friends. Finally, Freedom is ‘home sweet home’ …and safe at Farm Sanctuary.

Freedom inspired many people to act on her behalf. In addition to being awarded the “Key to the City” by Cincinnati Mayor Charlie Luken, Freedom was assisted by renowned artist Peter Max, who helped make Freedom’s rescue possible when he offered to donate artwork for her release. Freedom has captured the hearts of millions of people across the country, and now she will continue to teach people to save ALL cows, by encouraging people to go vegetarian. 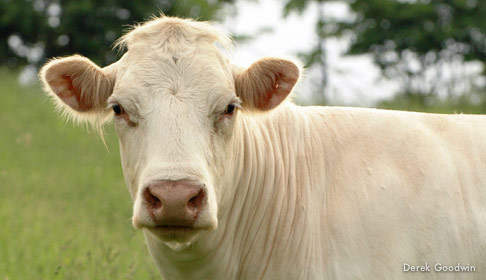 Since her arrival in April 2002, Cincinnati Freedom has enjoyed all the comforts and joys that every cow deserves. She has made friends with many of the cows in the herd, and is especially close to two other daring escape artists named Annie Dodge and Queenie. Each day, she spends hours grazing and lying in the sun with her new buddies. She has put on some much needed weight, and the few injuries she had when she arrived have long since healed. She is still not too fond of people, but seems to have resigned herself to tolerating all the media attention she is getting. She has many human visitors, even some from Ohio, who have heard her wonderful story and just want to meet her. Because of the difficulty involved in handling a cow such as Freedom, she will never be adopted out to another home, and will live out her life here with her herd. However, if you would like to sponsor Freedom or any of her bovine friends, please click here.