She made a daring dash from a New York City slaughterhouse in Queens… and won the hearts of thousands of people who joined her quest for freedom.

We’re talking of course about “Queenie”, a young cow who was slated for slaughter at Astoria Live Poultry, a meat market that keeps live animals and allows customers to choose the animals they want butchered. After hearing the screams of other animals, Queenie made her own choice — a choice any animal would make in the same situation if given a chance. After escaping from the slaughterhouse, Queenie ran several blocks through the streets of New York City, surprising motorists and passers-by. Though she avoided capture at first, the five hundred pound cow was finally caught after a wild chase with NYPD cars, local authorities and a tranquilizer gun.

Queenie’s freedom dash was quickly picked up by the media — and her story spread throughout the country. Queenie’s courageous escape was featured on national television, and millions of viewers saw a frightened cow running from the slaughterhouse, clearly aware of the fate that had awaited her. Hundreds of calls poured into The Center for Animal Care and Control and Astoria Live Poultry, urging both the agency and the slaughterhouse owner to release the animal to a sanctuary where she could live out the remainder of her life. 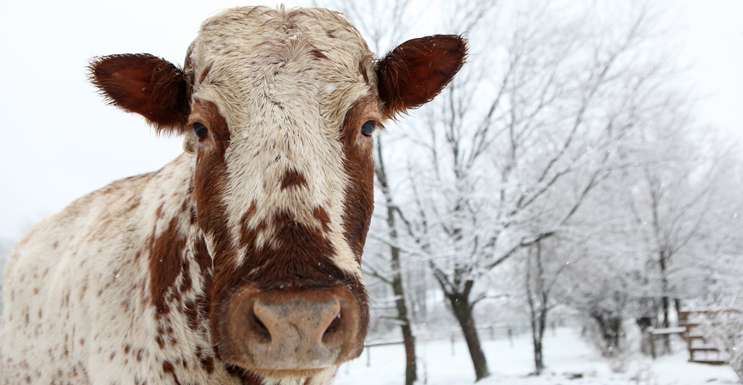 Alerted to the cow’s plight by Farm Sanctuary members, we immediately contacted the animal control agency and offered to provide Queenie a safe, loving and permanent home. For several hours, it was unclear if the agency would obtain custody of the cow, but public sentiment and pressure paid off — and the slaughterhouse owner agreed to give the cow to the city. In statements to newspapers, Aladdin El-sayed, owner of the Astoria Live Poultry, which is a halal slaughterhouse stated;

“God was willing to give it a new life, so why wouldn’t I?” (Newsday). El-sayed also stated he had paid $500 for the cow, and had been fined $1,000 for causing an “animal nuisance”. The Health Department may fine him an additional $2,000. El-sayed claimed he “lost a lot of money,”, but that it didn’t matter because in his own words, “There is something with this cow.” (Daily News)

After receiving the word on Friday afternoon that Queenie would be given to Farm Sanctuary, our animal transport vehicle was rolling to New York City by Friday night. We picked up Queenie from the JFK Airport where she was being held and drove her directly to our New York Shelter. Queenie jumped off the trailer amid cheers from the sanctuary staff…and loud ‘welcome’ moos from the shelter cows.

Queenie has put a face on vegetarianism. With new stories on the major television networks, Associated Press, and articles in The New York Times, New York Daily News and dozens of other newspapers, millions of people learned that farm animals have feelings too.

Queenie’s quest has also launched a neighborhood effort to close the slaughterhouse. Like Queenie seizing her moment for freedom, residents have seized the news attention to draw attention to their demand to close the meat market. Among their concerns reported in the New York Post, residents stated;

“This is a market that we don’t believe is treating anything humanely, and we want to see it closed for that reason alone…Through the night, you can hear the screaming of the animals. I don’t know what they are doing to them”.

Queenie knew…and now the rest of the world knows too.